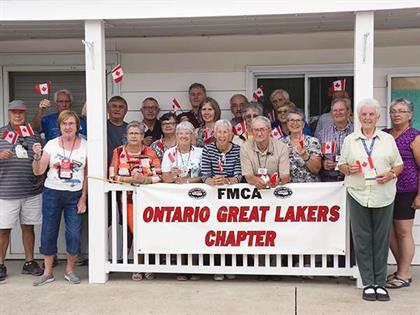 Members of this 3-year-old chapter already have some great memories of rallies past.

North of Lake Ontario and Lake Erie, and south of Lake Huron, are Canadian cities such as London and Toronto, Ontario. Former FMCA Great Lakes Area national vice president Don Crawford (who served from 2000 to 2003) and his wife, Kathy, live in London. A few years ago, they noticed that more than 200 FMCA members in their area did not belong to a chapter. The FMCA national office sent a mailing to those RVers, inviting them to form one.

“Out of that number, we got enough to start a chapter,” Kathy recalled. The group was chartered as the Ontario Great Lakers in April 2013.

Most of those FMCA members had never been in a chapter before and had no idea how valuable such groups are. New member Diana Snider noted, “The camaraderie of chapter members is unforgettable, especially around the campfire.”

So, although the group is young, its members have made memories (and enjoyed campfires). Typically they gather two or three times a year for rallies that last three or four days and include a weekend. “We just like to get together and have fun. Everybody is congenial and friendly and helpful at a rally,” Kathy said.

This group goes to events and shows together. Last year they attended a fabulous show at the Victoria Playhouse in Petrolia that featured Elvis Presley music. This past May they met at the annual Barn Dance Jamboree/Campout Weekend at the Blyth Campgrounds/Arena in Blyth, Ontario. “That one, you’re free to attend as many events as you want, or not go to any, if it’s not your thing,” Kathy explained. Next May, they’ll again hold their first rally of the year at the Blyth Barn Dance.

Last fall, rally highlights included visiting a large farmer’s market near Kitchener, Ontario. This year from September 23-25, potential new members are invited to join the Ontario Great Lakers at Cathcart Park, midway between Lake St. Clair and the southern tip of Lake Huron. The park is 18 miles south of Sarnia and a half-hour drive from the Victoria Playhouse. This year’s show is titled “The Men of Country,” with tunes made famous by country music’s biggest stars.

Most chapter members live between Windsor and Toronto, but not all, and FMCA members from the United States are welcome, too.  Chapter dues are $35 the first year, which includes badges, and $10 per year after that.