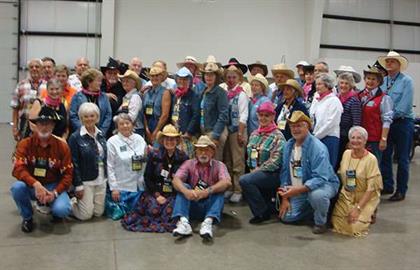 Serving others and having fun are the main characteristics of this group.

With 43 member families, the Oregon Coaches for Christ chapter encompasses mainly Oregon residents, but FMCA members don't have to live in Oregon to join. The group also has members from Washington; California; and British Columbia, Canada.

At this chilly time of year, chapter secretary Mary Millican said, many chapter members are down south in Arizona and California, and they see each other at unofficial get-togethers while they're there. The chapter's real rally season starts once the weather warms in Oregon.

Service is the name of the game for these motorhomers. The chapter has held a pre-rally gathering before the Northwest Area Rally and helped set up for that event also. "We did the table decorations at the rally — 120 tables — last year," Mary said. Also, along with the other Northwest Area Coaches for Christ chapters, they host morning devotions at the rally.

For this summer's FMCA international convention in Redmond, Oregon, the Oregon Coaches for Christ chapter has volunteered to drive the handicap carts. They'll hold a pre-rally at the Redmond convention site, too.

The work they do to help FMCA activities is by no means the chapter's biggest service project each year. They get together, roll up their sleeves, and perform some kind of labor-type project for a charity each summer. In 2008 Oregon Coaches for Christ helped to get Hannah's House — a Teen Challenge Center — in Eugene, Oregon, ready to open. "It was a big job, with house and yard cleanup and fix-up," Mary noted. The center is the only Teen Challenge women and children's center in the state. Since then, Mary said, two couples from the chapter have catered dinner for the house's fund-raiser.

In 2009, the chapter worked on a Habitat for Humanity house in Coos Bay, Oregon.

To raise the money for needy families, and to finance the annual work project, the chapter holds a fun, and funny, brown-bag auction at its pre-Northwest Area rally get-together. Mary said the auctions themselves are "a hoot" and raise good money — $750 was collected at one. "Our favorite activity, after the work rallies, is the brown-bag auction," she said.

Chapter dues are $15. If you live in Oregon, or close to it, and would like to join this fun and hardworking group, contact FMCA's Chapter Services Department at (513) 474-3622, (800) 543-3622; This email address is being protected from spambots. You need JavaScript enabled to view it..