SPECIAL LIMITED-TIME OFFER: Join or Renew Today and Save 30%! 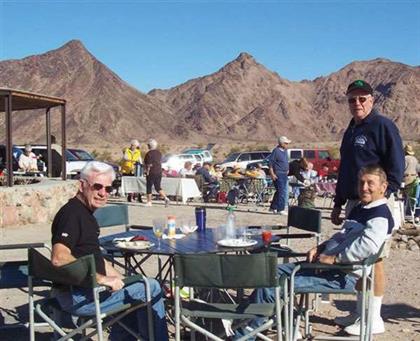 These RVers get together each winter in Yuma, Arizona.

Just like their avian counterparts, RVing snowbirds begin making their way south this time of year. They load up their motorhomes and don't come back north until spring.

And that’s exactly the principle that started the Desert Rovers chapter. These FMCA members "roost" in the Yuma, Arizona, area for fun and fellowship — and for warmer weather.

"Most everybody comes down (to Yuma) by the middle of October, then another push comes in right after the holidays," said chapter president Mike De Long. Chapter members arrive from homes in states such as Oregon, Washington, Wyoming, Idaho, Utah, and other western or northwestern locations.

Some members from Canada have to return north earlier because of tax filing, but "most of us don't leave until April and May," Mike added. That gives everyone plenty of time to have some fun in the sun. From October through March, the Desert Rovers have a rally each month. In addition, many of them get together to play golf on Sundays. The rallies also give folks a variety of opportunities to travel.

"This year in October we will be at Lake Alta, which is north and east of Phoenix," Mike said. An outing also is planned for November, and this year's Christmas dinner dance in Yuma will take place on a paddlewheel boat in the Colorado River.

In January the chapter will head to the Western Area Rally in Indio, California. In the past, the chapter has traveled as a group to other spots, such as Quartzsite, Arizona, and California's Salton Sea. The point is to vary the rally locations when possible, Mike said. Some sites have hookups and others don't.

Rallies usually include potluck breakfasts and dinners, but sometimes the group visits a restaurant or enjoys a catered dinner. The chapter also has a big trailer with cooking facilities that comes in handy, especially if members are dry camping together in the desert.

Mike said Yuma usually has good winter weather, and the town's proximity to Mexico is a plus. Bargain shoppers in the chapter flock south of the border for low prices on prescription medication and dental and optical work. The area is close to attractions in Southern California and Nevada, too.

If your winter plans include this warm-weather alternative to the upcoming chill, Mike invites you to check out the chapter by coming to a rally. Chapter dues are $10 per coach, and a chapter newsletter is produced from fall until spring. For more information, contact the Chapter Services Department at (800) 543-3622; e-mail This email address is being protected from spambots. You need JavaScript enabled to view it..

FMCA's 101st International Convention and RV Expo in Tucson, Arizona, March 26 through 29, 2020, is set to proceed as scheduled. FMCA will continue to monitor the COVID-19 situation, and if local officials deem that we must cancel the event, we will alert members using every communication method we have at our disposal. Association leaders are encouraging attendees to consult reliable sources regarding COVID-19 and to educate themselves about the virus; assess their personal situation; and make their own educated decision about attending. On March 5, 2020, FMCA sent a communication to attendees and provided them links to the CDC website and the Arizona Department of Health website. If you have registered and decide not to attend, please send your cancellation request to cancel@fmca.com.