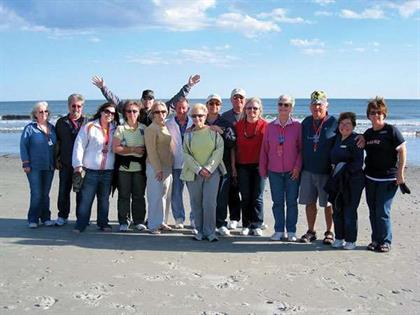 Members of this Massachusetts chapter like to go to the beach.

With this being the month of Thanksgiving, FMCA members who belong to the Massachusetts-based Cape Codders chapter have plenty to be grateful for: they're in a chapter that's active, still growing, and has plenty of fun.

Currently, the group consists of 223 member families. Most of them live in the Bay State, but others are from Connecticut, Rhode Island, New York, New Hampshire, or use a Florida address.

Chapter president Eugene "Gene" Barratt said the Cape Codders' rally season runs from April or May until October, with a gathering scheduled each month. Most rallies are held on weekends, but some begin on Thursday. The chapter's longest rally lasts for approximately 10 days and includes the Fourth of July holiday.

"For the Memorial Day rally, we usually go to Middletown, Rhode Island, which is just outside Newport," Gene said. "In July we go to Scusset Beach State Park in Massachusetts, which is on the Cape Cod Canal. We try to find places that have attractions in the area that will interest people."

The Rhode Island Memorial Day rally location, Second Beach, is a favorite of Gene's and his wife, Adele. "The area is beautiful and has a lot to offer," Gene said. "We rent a huge tent in case of bad weather and also to have a place to congregate. People play cards and board games in the tent." The rally also includes a crafts fair where members display and sell items such as greeting cards, afghans, and jewelry, and live music is provided by chapter members. And as at all Cape Codders rallies, food takes center stage, often with catered meals included.

The Cape Codders chapter has close ties with FMCA members in the Northeastern and Yankee Travelers chapters — so much so that they hold three combined rallies annually, which they call "tri-rallies," and even make sure that their rally schedules don't conflict. (All three chapters' rally schedules are listed on the Cape Codders' Web site.) "We have a fantastic relationship with the other two clubs," Gene said. "For the most part, I believe that the majority of us are members of each of the three. We are totally independent of each other and are indeed three different chapters, but we do all work together." Each chapter takes a turn hosting one of the combined rallies.

Rally-related activities have included a sunset cruise on the Cape Cod Canal, a brewery tour, and even a community service activity: cleaning up the dunes and beach at Horseneck Beach in Massachusetts. "Surprising what you will find in those dunes. It was actually a lot of fun," Gene said.

If you're interested in joining in, Gene says the Cape Codders will make you feel at home. Chapter dues are $10 per year. For more information, contact the Chapter Services Department at (800) 543-3622; e-mail This email address is being protected from spambots. You need JavaScript enabled to view it..

If you would like to have your chapter featured in "Chapter Spotlight," contact FMC associate editor Peggy Jordan at (800) 543-3622, ext. 212; or e-mail This email address is being protected from spambots. You need JavaScript enabled to view it..