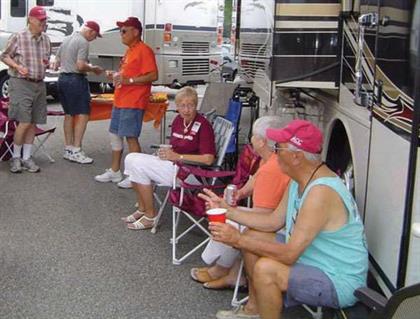 Anytime college sports fans gather in motorhomes prior to a football game, you can bet that a party will ensue. Now imagine the size and the intensity of the party when dozens and dozens of motorhomes and their occupants are parked together in the lot of Virginia Tech University's Lane Stadium/Worsham Field in Blacksburg, Virginia — a school whose football team has participated in a post-season bowl game every year since 1993.

But it's all in good FMCA fun. And it's likely to grow. At last count there were approximately 25 chapter member coaches, but when other motorhome owners join the crowd at a big home game, there may be 60 coaches altogether. And to Bryan, the non-chapter members all are potential recruits. In typical fashion, he goes around talking to them about FMCA at these events, trying to get them to "see the light," as he put it.

That's how the chapter started in the first place. Bryan and his wife, Katie, bought a motorhome so they could have a sure place to stay when they traveled to Blacksburg or other sites for the football games. "I had the idea, 'Hey, this would be an awesome way to have a chapter, and really just have an excuse to get together and meet,'" Bryan said. "So I went around and talked to people and introduced myself. People who were not members, we got them to join FMCA when they joined the chapter."

Bryan's outgoing nature helped him sell the idea to potential chapter members, but perhaps so did his age. It's pretty hard to forget meeting a Blue Bird owner who is 28 years old. "I think am the youngest chapter president in FMCA," he admitted.

The Hokie Travelers were chartered in November of 2005, and ever since the group has met only at football games, officially. But that doesn't mean they haven't gathered on other occasions. "We are really good friends, beyond being an FMCA chapter," Bryan said. Outside the football season, they keep in touch.

Many chapter members are older alums of Virginia Tech, or they're parents of students who now attend the university. Some dedicated chapter members live outside Virginia and drive several hours to get to the games. And nearly everyone is in the stadium parking lot on Thursday prior to a Saturday afternoon game. "Most folks are well settled by Friday," Bryan said.

The chapter even has started a tradition of celebrating Thanskgiving dinner together in their motorhomes on the Thursday prior to a home game, divvying up the cooking duties and enjoying a feast.

And what if the game is away? As long as it's in the East Coast area, Hokie Travelers members typically attend those, too.